While this resulted in loss of income and livelihoods, pushing many to the brink of further financial exclusion, headway made by policymakers and regulators paved the way for many technological and digital innovations.

As we enter 2021, we see a year that holds exciting opportunities for financial inclusion, especially for women. With many initiatives ongoing across our network, here are five exciting trends to look forward to this year:

As the COVID-19 crisis began to spread, AFI members responded swiftly to ensure that gains made over the past decade in gender inclusive finance and national financial systems were not lost in pandemic response and recovery policies. AFI’s COVID-19 policy response and dashboard continues to guide AFI members from around the world, encouraging them to share resources and adopt and implement gender-sensitive policy interventions with the aim of mitigating pandemic-related effects.

Among the AFI frontrunners was Reserve Bank of Zimbabwe, which unveiled a ZWD600 million (USD10.5 million) facility for MSMEs, youth, women and older persons that compensated for loss of income during lockdown periods. The central bank also increased to ZWD3 billion (USD52.3 million) from ZWD500 million (USD8.7 million), its medium-term bank accommodation facility – a facility through which banks access interim funds. It also reduced the annual interest rate applicable to that facility to 10 percent from 15 percent, specifically for MSMEs.

Sex-disaggregated data as foundation of fiscal and regulatory policies

Currently, 20 AFI members actively report sex-disaggregated supply-side data via the AFI Data Portal. As they start to reap its benefits in shaping better fiscal and regulatory policies, the data collected will also help members effectively integrate gender considerations into their national financial inclusion strategies and support the acceleration of financial inclusion for women, both as individuals and business owners.

Reserve Bank of Fiji (RBF) is leading this trend in the AFI network. In June 2019, RBF introduced its industry-wide Financial Sector Development Policy Statement on Minimum Requirements for the Provision of Disaggregated Data. For accounts at banks and credit institutions (depositors and borrowers), data collected included information on gender, age and location by province. Data on payment instruments and services, mobile wallet accounts, life and general insurance policies, capital markets investments, remittances and superannuation were also part of the collection.

Levelling up with digital finance services

COVID-19 has exponentially accelerated the use of digital financial services (DFS) worldwide. According to a report by Global Partnership for Financial Inclusion, an estimated 140 million women had opened a bank account for the very first time specifically to receive government payments pre-pandemic. The COVID-19 crisis has accelerated this trend further suggesting that digital payments have a critical role to play in promoting financial inclusion for women.

Among DFS trends anticipated this year is the digitalization of village savings and loan associations (VSLAs), women’s mobile phone ownership, agent network cash-in and cash-out and digital identity. In 2018, the State Government of Chhattisgarh in India distributed 500,000 free mobile phones to increase their usage among targeted poor households. The phones came equipped with SIM cards, internet and calling facilities for the first six months. Approximately 90 percent of recipients were women while the remainder were college students. The initiative was further supported with the building of 1,500 transmission towers to boost telecommunication infrastructure, especially in rural areas. This and more case studies can be found in AFI’s Lessons on Enhancing Women’s Financial Inclusion using Digital Financial Services special report.

AFI’s Policy Framework for Women’s Financial Inclusion using Digital Financial Services offers an interplay of four critical considerations that should be considered by policymakers in leveraging DFS to advance women’s financial inclusion: gender-sensitive policy and DFS legislation, regulation, infrastructure and the demand side. 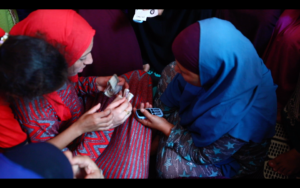 Working to reverse this trend, Central Bank of Egypt has disbursed EGP30 million (approximately USD1.85 million) to formalize and digitize VSLAs on a mobile wallet platform to date, as outlined in AFI’s latest case study, Formalizing Village Savings Groups with a Gender Lens in Egypt. The fund scaled up the digitization of 100,000 women beneficiaries, promoted cashless, safe, secure and simpler processes for all members and provided automated reminders for payments and collections. VSLA members were able to transact virtually with support from facilitators on the ground in the rural areas.

In an effort to highlight strategies in upscaling and integrating gender savings groups into the formal financial system, AFI issued a guideline note featuring case studies from Zambia, Egypt, Rwanda and Ecuador, and how they work towards driving their financial inclusion agenda forward and meeting the Sustainable Development Goals, particularly goal five on gender equality.

The rise of movable collateral registries

By amplifying inequalities faced by women, the ongoing pandemic has brought attention to women’s lack of access to traditional forms of collateral. Women-owned and women-led businesses can benefit greatly from the introduction of collateral registries for movable assets, as well as the establishment of an inclusive legal framework for secured transactions, where movable assets can be used as collateral to secure loans.

MSMEs constitute 90 percent of all businesses and more than 50 percent of employment globally. Market realities, nevertheless, point to the fact that women-led MSMEs are more credit-constrained than male-owned enterprises, and this is largely attributed to most women-owned enterprises being informal in nature. AFI’s new survey report, Alternative Finance form MSMEs, provides policymakers and financial regulators with guidelines and country examples on issues to consider when developing alternative MSME finance.

As we lead up to the five-year milestone of the Denarau Action Plan at the end of 2021, many AFI institutions are actively planning their COVID-19 response strategies by aligning their gender inclusive finance (GIF) efforts with their national financial inclusion targets, including plans for a sustainable green recovery. While many GIF areas still see a lot of room for improvement, AFI member institutions are optimistic that their work is helping vulnerable communities become more resilient to this and future crises.

AFI is the world’s leading organization on financial inclusion policy & regulation. A member - owned network, we promote and develop evidence - based policy solutions that improve lives of the poor through the power of financial inclusion
Guidance